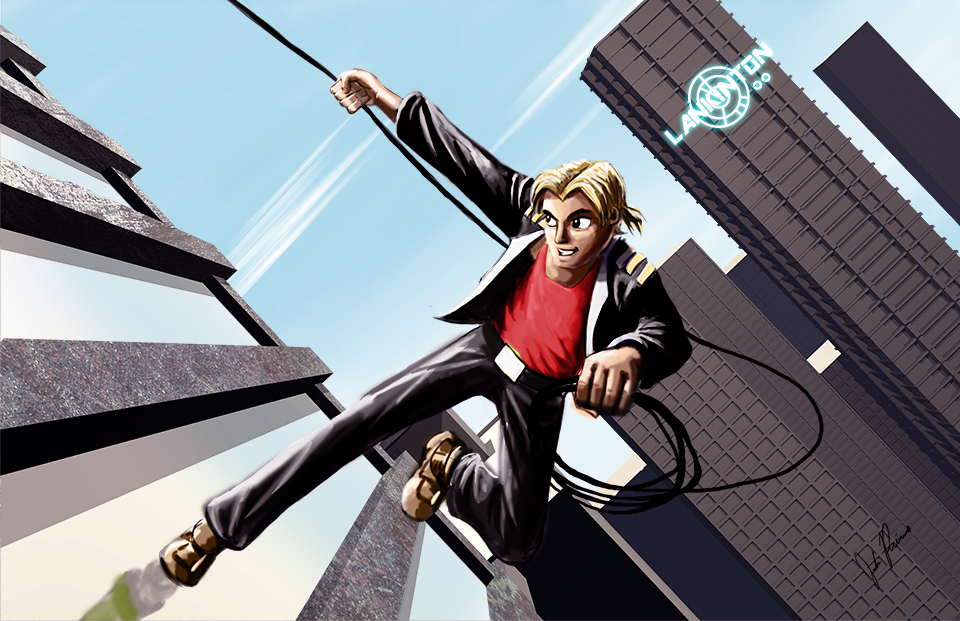 You may spend 2 energy to place a Tangle token on a space within range 2.

Remove the Tangle token at the start of your next turn.

After his parents disappeared under mysterious circumstances when he was 10, Reese Limber grew up as an orphan in a strict boarding school on the cityworld of Skyfar. With little regard for authority (or boundaries) he would escape nightly, climbing out of windows and exploring the city.

He mapped out routes of rooftops and alleyways, leaving ropes and cables to climb or to swing between buildings.

By the time he left (was thrown out of) the school, his climbing and rope handling skills had gained him a reputation in the criminal circles of Skyfar. He began his career as a burglar for hire, gaining him the nickname "Roperunner".

In a handful of minutes, armed with little more than a grappling hook, he could access highly secure locations, incapacitate security personnel, acquire whatever he was there to collect, and vanish out some 100 story window into the night without a trace.

When Reese heard about the Khrysos treasure, he knew his unique skills would make him perfect for the job.

He has many leads on the line who would pay handsomely to hook some of the treasure if he could swing it. He believes he might be able to reel in enough to hang up his criminal career… or perhaps, at the end of the line, he will finally be able to tie up the loose ends around the tangled circumstances of his parent’s disappearance.

"You know, at this stage of my career, you would think I'd be tired slinging of rope puns... but I'm knot. "
Reese Limber
© Josh Rivers