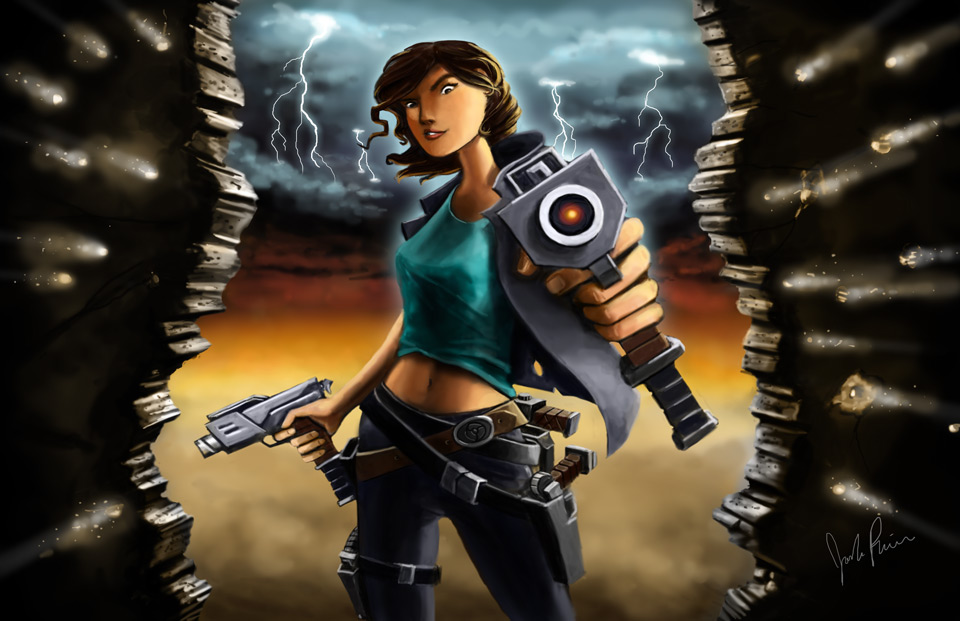 A Score to Settle

Whenever Faye is damaged by another Hunter, she may place a Vendetta token on that Hunter's card. When Faye damages a Hunter with a Vendetta token, she may remove that token to deal an extra point of Damage.

Faye Demared is not happy.

Growing up in the shadow of her sister Mesara, she has always felt like the universe handed her the short end of the stick.
When Mesara decided to pursue a career as a pirate, Faye opted for a solo career as a bounty hunter.

Faye ended up in a crew of less-than-experienced bounty hunters trying to scrape by, before an unfortunate "incident" found Faye marooned by her captain and crew on the savage jungle planet of Ra’hoon for half a year.

Faye managed to survive, (one of her skills) and escape (another thing she excels at) and is now looking for her coward captain who abandoned her to exact her revenge (probably the thing she best at in the universe).

She is a fierce fighter and a ruthless opportunist. She wields dual blaster pistols and can unleash a barrage of laser fire at her foes.

While you DEFINITELY don't want to be on her bad side, if you can get her on your team, she is a loyal ally.
.... Just remember not to give her a reason to hate you.

"Look, I've got a long list of people I really hate. But that doesn't mean I don't have room for you. I'm just saying you REALLY don't want to be on that list."
Faye Demared
©2022 Josh Rivers