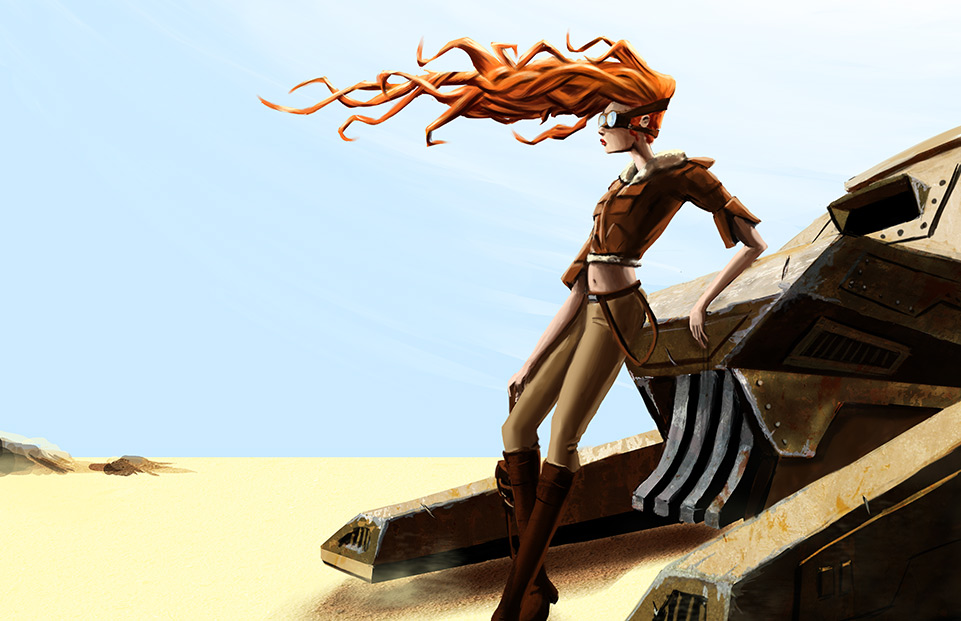 Place a rubble token over the walls Elia moves through.

Rubble tokens can be moved through normally.

Either due to a large dose of luck or just a natural skill, Elia is excellent at finding things.

When she was 7 years old, she discovered the fossilized remains of an as-of-yet undiscovered creature while digging in her back yard. At age twelve, she tracked down the ruins of the ancient Ghorling kingdom while on vacation with her family.

Her keen talents for discovery gave her a glowing reputation in the Galactic Exploration Agency Academy where she was quickly promoted to Scout Tank Pilot, a coveted deployment that would see her surveying and exploring new worlds on a regular basis.
Her trusty scout tank (affectionately named Sharon") has been her home, arsenal, and in many ways her partner on many adventures. Elia is a talented pilot and operates Sharon like an extension of her, managing to deftly maneuver the hulking chassis through delicate areas. Although she sometimes finds the ability to plow full throttle through the more optimal strategy.

Elia was the first hunter to officially join the Khrysos Hunt after discovering the first Khrysos treasure on a planet she was scanning. Always eager to explore new horizons, she wants to investigate the mysterious Khrysos worlds and learn their strange secrets. But with so many other Hunters competing, she will need to use all her wits (and her tank) to get to the treasure first!

"There are very few situations where having a tank isn't helpful. In fact, I can't think of any off the top of my head."
Elia Rose
© Josh Rivers